Seagulls, Pepperoni and the Empress Hotel

This story seems almost too unbelievable to be true but I too had a run in with gulls and a burger at Nellies.

This story though is epic.  :rofl:

After 17 years, The Fairmont Empress hotel in Victoria, B.C., has lifted its ban against Nick Burchill, a Dartmouth, N.S., man whose suitcase full of pepperoni lured dozens of seagulls to trash his hotel room.

"I didn't like the feeling of being banned from somewhere," Burchill said. "So when I was out there last week for a different conference, I thought that I would approach The Empress and see if I could officially get my record cleared."

Burchill's story began with good intentions. He was taking a small suitcase worth of Brothers Pepperoni — a widely requested Halifax delicacy — to some of his navy friends in Victoria.

"It was a long flight, that time of the year where everyone travels, so the bag got lost, misplaced for a period of time," said Burchill, who wrote a widely shared Facebook post about the ordeal.

When the pepperoni finally arrived at the hotel, Burchill said he worried it would get warm because his room at The Empress did not have a fridge.

He decided to keep the meat cool by laying it out on a table near the window ledge in the room.

"And that's when things kind of went bad," said Burchill.

'The seagulls were flying everywhere'
Burchill left the room for a few hours to take a walk. When he came back, the room was full of seagulls.

"I don't mean just a couple of seagulls. I can only estimate how many there were. I'm thinking somewhere between 30 and 40 seagulls had come in through this open window while I was gone," said Burchill.

"And I would have never thought of that because the East Coast seagulls aren't that brazen. They'd never come into a room or do that sort of thing — at least I don't think they would."

The seagulls were startled when Burchill opened the door. He said many tried to leave through the small opening all at once.

"The seagulls were flying everywhere and they had been there for a long time eating Brothers TNT Pepperoni, so you can imagine what the room looked like even before I came back. And now we've got seagulls flying around, the curtains are falling down, the lamps are falling down. It was a real mess," said Burchill.

Shoe, towel tossed out window
Complicating matters was the fact that Burchill had just started a job three months earlier. His employer had booked the hotel and he needed to attend a dinner with customers. There were two seagulls left in the room and he had to get them out.

"The last seagull, it was running around the room and this is a fairly large room, nice room — or it was. And I was chasing this seagull around, it had a big piece of pepperoni in its mouth and I could not get it to leave."

Burchill said he ended up grabbing a towel from the washroom and he jumped the seagull, wrapped it in a towel and threw it out the window. The seagull, Burchill said, was shaken but wasn't hurt.

While everything was happening in his room, Burchill said there was a line of tourists out in front of the hotel who witnessed both his shoe and the seagull wrapped in a towel falling from his room.

Horrified hotel cleaner
"I guess that made an impression on some people. It wasn't very smooth," said Burchill.

Burchill had to go downstairs to get the shoe and towel. He went back up into the room, where the smell of the birds and pepperoni was becoming more and more apparent.

But he had to get to the dinner with customers, so he started to clean his shoe, which had fallen into some mud.

As he was drying the shoe with the hair dryer, the power went out in his room. At that point, Burchill "realized I was way in over my head with this mess" and called the front desk for help.

"They sent this poor lady up and I still remember the look on her face when she opened the door," said Burchill.

"She had her cleaning kit with her and it was quite clear that the kit that she had with her was not going to cover the damage and the mess that was in that room."

Making amends with pepperoni
Hotel staff moved Burchill to another room for the rest of his stay.

Burchill said staff at the hotel were really nice about the whole thing, but a letter was sent to his employer telling them he would not be allowed to stay at The Empress again.

It was a decision Burchill said he respected and understood. But he wanted to make amends, which led him back to the hotel last week. He asked to speak with the staff member who dealt with him the last time, but was told she no longer worked there.

"When I was talking to the people at the desk and the manager, they did say that they had heard this story from a long-term employee that works there. I was just kind of in and out. I didn't want to overstay my welcome," he said.

"I just apologized. I was forgiven. I left them a present of about a pound of Brothers TNT Pepperoni as a peace offering."

Jeremy Heryet, marketing manager at The Empress, confirmed to CBC News by email Sunday that the ban against Burchill has been lifted.

Burchill said staff encouraged him to book a room at the hotel the next time he's in town.

"I've made friends with one of the managers there and he's made it quite clear that I'm encouraged to stay with them. They'll be disappointed if I don't."

jollyjacktar said:
This story seems almost too unbelievable to be true but I too had a run in with gulls and a burger at Nellies.

Looks like this story is in the big leagues, now.

Bahahahaha! Just seeing the title made me smile.

Benedict Cumberbatch reads a hilarious letter of apology to a hotel​

In March of 2018, 18 years after being banned from the Empress Hotel in British Columbia, Novia Scotia resident Nick Burchill wrote them a letter and asked for forgiveness. Three days later, by which point his letter had been reprinted online and read by millions, the ban was lifted. Benedict Cumberbatch performed this letter at Letters Live at the Royal Albert Hall, London in October 2022.

That story is a NAVRES legend.

In honour of RCN PA picking it up on their social media, I propose the following: 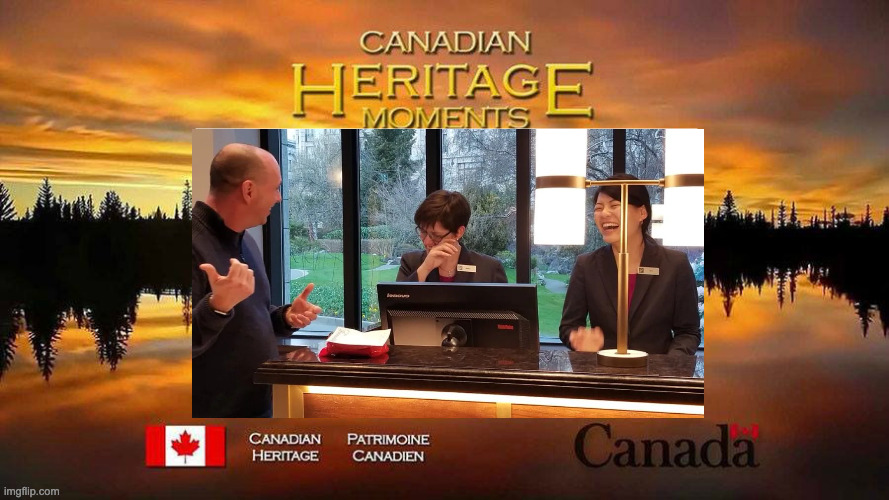 Resort CEO told women at B.C. conference to 'go clean some rooms and do some dishes'